8 Restaurants in the province of Alicante for Nature Lovers

Surely you’ve wondered more than once where to eat when you go out on a route through the province of Alicante. This is our selection of the best restaurants (our favorites!) for hikers.

Although we are very fond of snacking or having an improvised picnic outdoors, we also like to look for restaurants near our routes to make the whole plan: nature and gastronomy are always a good tandem!

That is why we have made a small but essential guide of places to eat in Alicante province which, although very different from each other, have several things in common: they are close to our hiking trails.all of them make things with care, use local products and have a great commitment to the environment.

Keep it safe, it will come in handy… and share it, your friends and family will thank you for it!

Restaurants for hikers in Alicante province

Whether you do
the circular route
from Finestrat to crown the Puig Campana as if you decide to go into the to go into the hidden face of the second highest peak in the province of Alicante, this restaurant is a good choice. Also if you dare with the route
of Monte Ponotx
from Polop!

Ca L’Àngels is cozy, familiar and warm, so it is especially recommended in autumn or winter. Also for its home-style cooking that Vicenta Teuler cooks with love. His brother Paco, in the dining room, will recite the menu from memory, which changes daily, and will recommend unique wines. You are in good hands! What to order at Ca L’Àngels? The espencat, the fried mintxo, the balls in broth and, of course, some of its spoon dishes such as olletas or rice.

If you are going to do
the route of the Barranc de l’Infern
PR-CV 147, called the “Cathedral of hiking”, we have two recommendations for you:

They say the best places are hard to get to! And this home-style restaurant with unparalleled views is one of them. Go with time and be patient on the way up, because it’s worth it: they have a menu of the day with essential dishes such as the mellow duck fideuá with mushrooms or the wild boar stew. Attention vegetarians: some of their dishes, such as scrambled eggs or casseroles, are adapted to be suitable for vegetarians.

This “casa de menjars al regne de la muntanya” has its own personality. As they themselves say, they cook health and commitment to the land… from an impressive balcony overlooking the Vall de Laguar. Their values, very much in line with ours, are embodied in their traditional Valencian cuisine but with a twist. At the stove, the restless chef Evarist Miralles, who has been making people talk for several years now. Apart from its privileged location, we like the quality-price-pleasure ratio of its menu, which is unbeatable: for just over 30 euros per person, you can choose 3 starters, a main course and a dessert.

We continue our tour through the province of Alicante! In the area of La Vall de Guadalest it is difficult to choose, because there are several very cozy restaurants, but for the moment we recommend one: Venta La Montaña, in Benimantell. Write it down if you are going to do any of the following
routes in the Sierra de Aitana
or the
Circular route of the Guadalest reservoir
!

What was once a post office in the early twentieth century is today, and since the 80s, an interesting roadside restaurant and home cooking. Its dining room resembles that of any village house in the area, with rustic decoration and a lot of personality. What to order at Venta La Montaña? The olleta de blat (a stew made with whole wheat grain, beans, pig’s trotter, rib, ham, turnip, carrot, thistle stalk and chard) or its rice dishes (baked, with crust, broth with rabbit, chicken and artichokes…). And leave room for dessert!

Further inland, in the region of Comtat, there are also many options if you are going to make any route such as
those of the Font Roja
o
those of Serra de Mariola
. We kept one, but we will continue exploring the area to give you more clues in the near future!

The chef Natxo Sellés, in his restaurant of the same name, brings unbound creativity to each dish: venison croquettes, turbot and shrimp figatell with piquillo sauce or his iconic steak tartar with puffed rice, sherry mayonnaise and truffle. The most classic (or those who want to know better the cuisine of the area) also have snacks such as pericana de capellá or rice: cauliflower and cod, cuttlefish and garlic or duck, truffle and foie. A tip: leave room for dessert, they are a delight! How does the
Almond donut, chocolate and tangerine ice cream
or the
Jasmine cream, apple and eucalyptus ice cream.
? You can’t miss their version of “Pan, aceite y chocolate” (bread, oil and chocolate), the typical snack of our childhood!

On this occasion, we approach the Mediterranean, which also gives us routes with views that will remain etched in your retina. If you decide to make the
Cap d’Or watchtower route
or the
Benitatxell Cliffs Route
one of our latest discoveries!

The project of Adrián Ruiz, son of the well known
Miquel Ruiz
(of
Miquel’s Baret
of Denia), is beginning to emerge. Its location is somewhat atypical, in the middle of the road to Moraira, and the simplicity of a perhaps somewhat dreary place does not help either, but gastronomically it is a must. Do not miss their volcanic bravas, mackerel sashimi or cuttlefish figatell.

Another of our favorite routes is
the one of the 8 villages
of the natural paradise that is the Vall de la Gallinera. Still do not know this beautiful valley in the interior of Alicante? This spring is a good time to discover it, in full cherry blossom.

The area of the Vall de la Gallinera is a paradise for hikers but a gastronomic desert where there are few notable restaurants. The remoteness of the villages in this valley and the communications by curvy roads do not help. One of them, and our favorite, is Miró Cuina, the project of Enric Miró and María Navarro, with a very friendly Daniel Harkin in the dining room. There, they offer a unique menu (42€) in which they reflect their peculiar cuisine, which is based on seafood products that they buy in the fish market of Gandía. They also sell their own hand-smoked fish and bread that they make themselves! Among its dishes you will find, for example, a smoked moixa brioche, a pastisset of herbs and white shrimp or a tasty tuna with eggplant and saffron. Miró Cuina is a gastronomic jewel for palates that are always looking for something different.

We continue with our routes:
the one of the Cavas de Mariola
from the beautiful village of Agres, for example. Where to eat in the Comtat region? It is clear to us.

It is surprising to find such a restaurant in a town like this. Coherence, human quality (and warmth) and local products are the hallmarks of this temple for lovers of local cuisine, with Paqui Pascual in the kitchen and her husband and son, both David Navarro, in the dining room. They only work with several tasting menus (between 40 and 50 euros per person) in which you will find very unique dishes, such as their version of dried octopus (with fried egg cream, lentil caviar and Valencian pickles), their salted fish, poultry rice dishes (pigeon, guinea fowl and octopus) or a comforting almond and saffron broth with truffled balls. For meat lovers, Paqui also prepares a shoulder of lamb baked Al-Andalus style or a pigeon breast with sloe and caper sauce. For dessert, without a doubt, their almoixàvena with arrop ice cream and tallaetes. We promise you that when you go there you’ll think you’ve taken too long to find out…

And so far this is the end of our gastronomic tour through the province of Alicante. But it doesn’t end here! In the following chapters, we will tell you where to eat in Relleu, Sellathe area of the Vall de Seta or the Vall de Pop. To be continued…

I live (and eat) for storytelling in Condé Nast Traveler, Repsol Guide, Hedonist Guide o Gastroactitud. My thing is not to work, but to “travel”. My other favorite verbs are celebrate or share and I practice them in bars, around a table or in the middle of nature. Whatever the setting, there is always good bread, olive oil and artisan cheese. I confess that I don’t wear a watch, because life without haste tastes better. 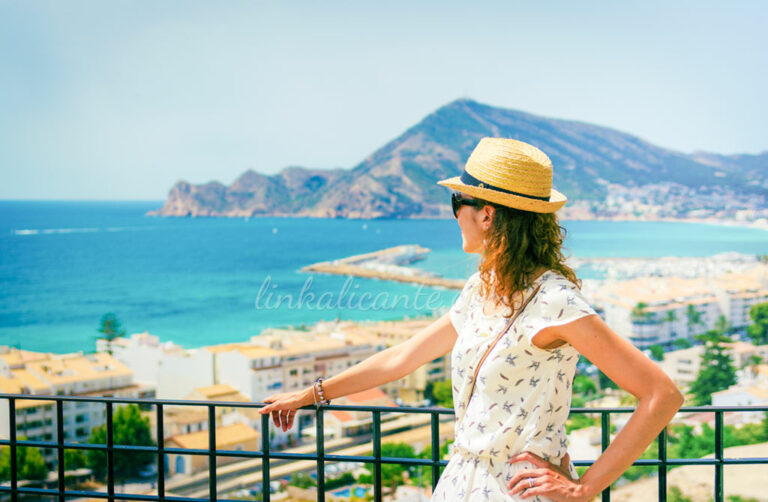 ALTEA, what to see and do in one of the most beautiful towns in Alicante

Complete guide to ALTEA: places to visit, beaches, routes, gastronomy and the best plans to do in one of the most charming towns on the Costa Blanca. 12 Routes for all audiences in the province of Alicante

Taking your first steps in Hiking? Start with this selection of Simple and Beautiful routes in Alicante. Ideal for families and seniors. TABARCA Island: What to see, how to get there, beaches and gastronomy ⛵️

Complete guide about Tabarca Island (Alicante): discover what to see, where to eat and what to do in the biggest island of the Valencian Community. The Relleu Footbridge, a dizzying path over the abyss The 20 Most Beautiful and Natural Coves in Alicante province Icolk-instagram Icolk-paper-plane Icolk-facebook-square Icolk-pinterest-p
Manage Cookie Consent
We use our own and third-party cookies to improve our services and show you advertising through Google Adsense, by analyzing your browsing habits. You can change the settings or get more information in the Settings and/or the links below.
Manage options Manage services Manage vendors Read more about these purposes
Settings
{title} {title} {title}
Scroll to Top