The Puig Campana , The Magical Mountain of Finestrat , is the second highest peak in the province of Alicante. A calcareous mass that rises abruptly up to 1,408 meters high, a few kilometers from the Mediterranean and the tourist resort of Benidorm .

A landmark in Alicante geography, for many reasons: its imposing presence, its perfect conical shape, its challenging slope and unevenness, the legend of its Tajo de Roldán … Without a doubt, the Puig Campana is THE MOUNTAIN , with capital letters.

Do you dare with this challenge? I’ll tell you how to climb to the top, read on to find out! 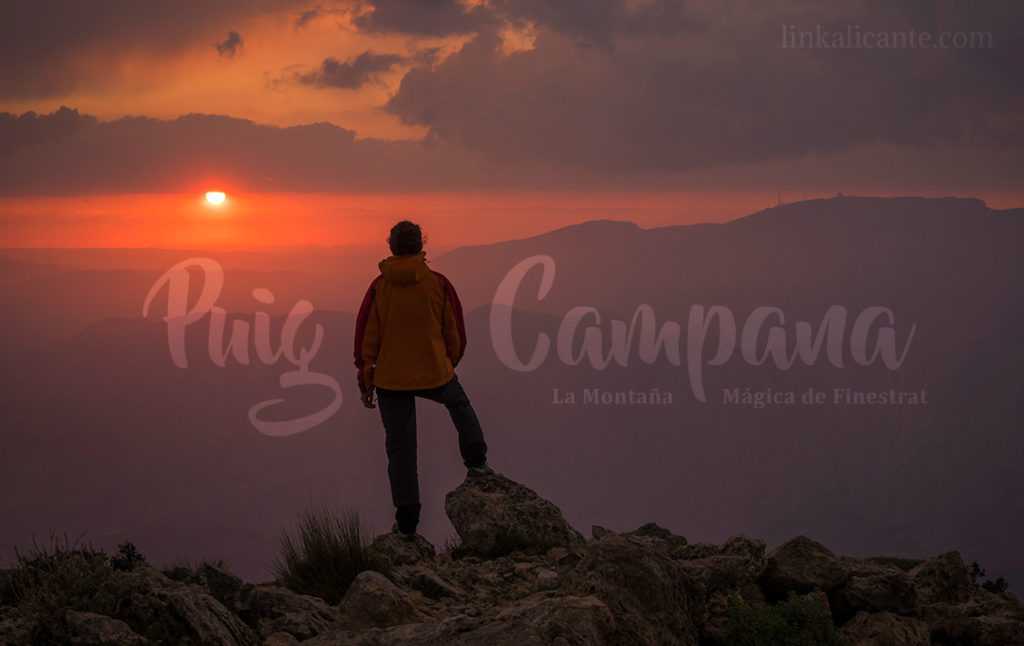 We are facing one of the most demanding hiking routes in the province of Alicante (and in the entire Valencian Community), due to its high accumulated difference in altitude, which exceeds a thousand meters of ascent and descent.

For this reason, as well as the rocky and steep terrain at some points, we classify the route as difficult , and we do not recommend it for people who are not used to going out to the mountains. However, and due to the circular nature of the summit, we have the option of only doing the circular route, without going up to the summit. In this case, we would find ourselves before a route of medium difficulty.

Book this tour with a Professional Guide (min. 2 pers.) 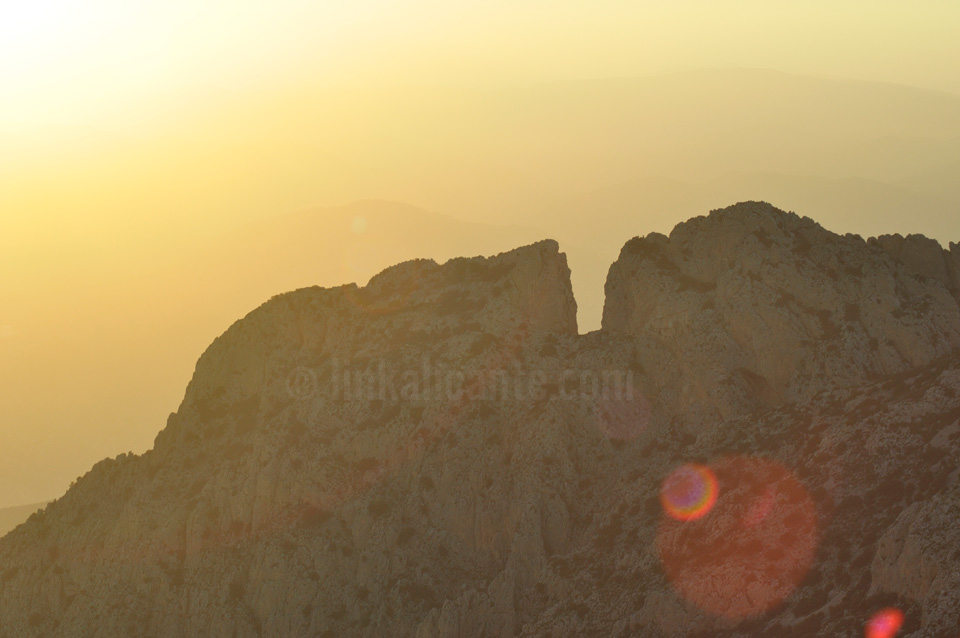 This article was originally published on LinkAlicante.com in November 2008, and updated in November 2018, July 2019 and January 2020. 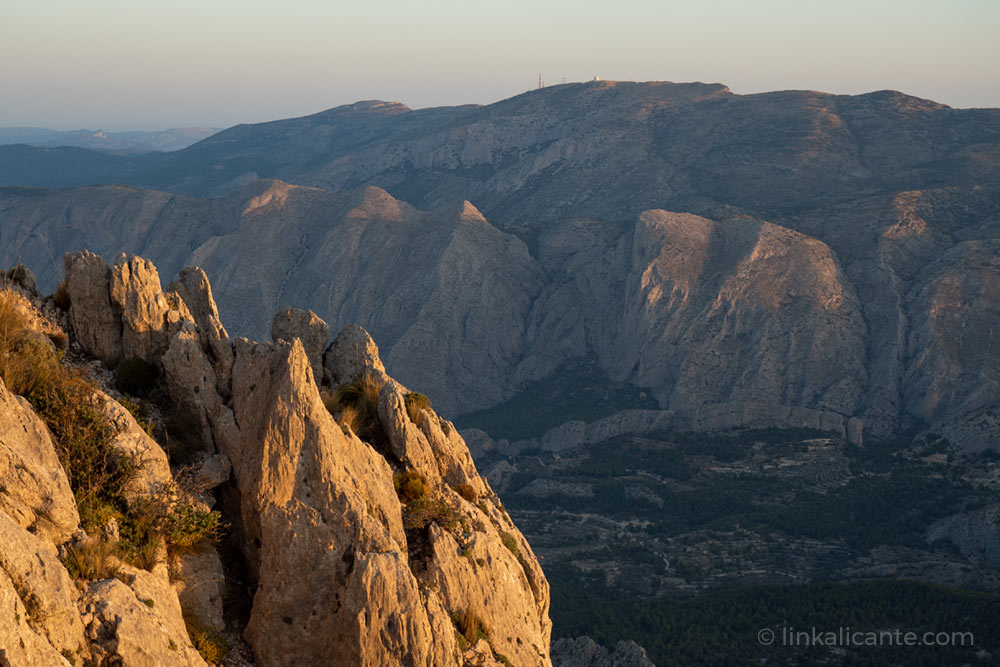 It is important to bear in mind that we are in an area of great landscape and environmental value , within the so-called Puig Campana and Ponotx Protected Landscape . An area that has a protection figure similar to that of a Natural Park, declared as such in 2006 by the Generalitat Valenciana.

In the area we find several micro -reserves of flora, with species protected by legislation.

Due to the large influx of visitors, it is an area subject to a lot of environmental stress, so it is advisable to take maximum care of the environment. Thanks!

Route up to the summit of Puig Campana from Font del Molí de Finestrat, partially following the route of the short-distance path PR-CV 289 “Volta al Puig Campana” (marked with the usual white and yellow markings) in an anti-clockwise direction. schedule.

The route takes us, passing through the Font de la Solsida , to the ” Coll del Pouet “, a strategic crossroads on the north face of the mountain. From there we made the ascent to the summit , in a round trip section along the same path, passing through the “Bancal del Moro” (hill that separates the two main peaks of Puig Campana), and from there to the top, excellent viewpoint towards the coast and the interior.

Back at the Coll del Pouet , we resume the circular route along the PR-CV 289. Shortly after beginning to descend, we passed by the José Manuel Vera Refuge (somewhat dilapidated). The descent continues continuously, with a fairly good surface, until finally reaching Font del Molí, ending this challenging route.

We prefer to do the circular route in an anti-clockwise direction, since the path that goes up to the Font de la Solsida has a more irregular terrain, and we prefer to do it uphill.

Book this tour with a Professional Guide (min. 2 pers.)

To begin our adventure, we go to the picturesque town of Finestrat , which is worth stopping to visit, and where we can recharge our batteries once the route is over.

From the urban area of Finestrat, we take the detour to the Font del Molí Recreational Area, the main spring that collects the waters of the great colossus of the Marina Baixa. At Font del Molí we find a car park and an information point. However, it is advisable to get up early, especially on weekends, as the influx of people to this mountain is usually high.

✓ Casa la Campana. With three bedrooms and unsurpassed views of the village and the surroundings.

✓ Casa Figueretes. A charming rural house in the old town of Finestrat

The Legend of Puig Campana 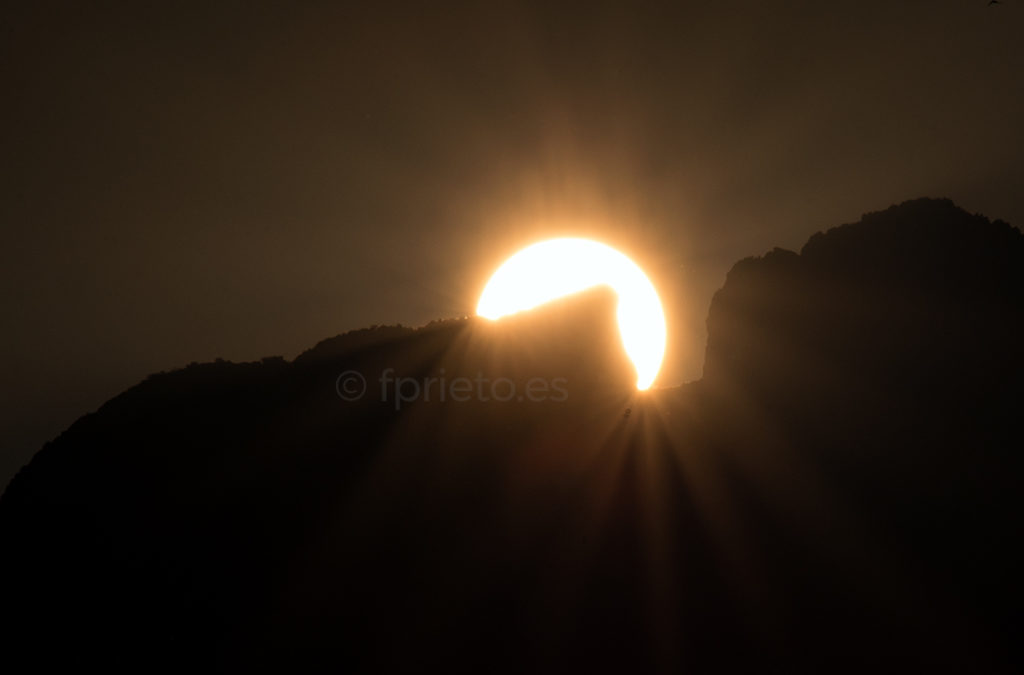 Legend has it that the cut in the form of a “window” that Puig Campana presents on its secondary summit, Pic Prim , was inflicted by the giant Roldán , when he was trying to save his beloved from a curse.

Another curiosity is that the origin of the name of the town, Finestrat , could come from the cut in the mountain, which would have been called “La Serra del Finestrat” at one time.

From the Font del Molí car park, the appearance of the mountain is impressive . A tingle spreads from our stomach to our back, making our hair stand on end. We are undoubtedly facing one of the most challenging events for lovers of hiking in Alicante .

Right from the beginning, the Campana begins to infect us with those very special vibrations that it transmits and we are invaded by a mixture of emotions, from respect to admiration, passing through the inevitable doubt “will I be able to reach the summit?” 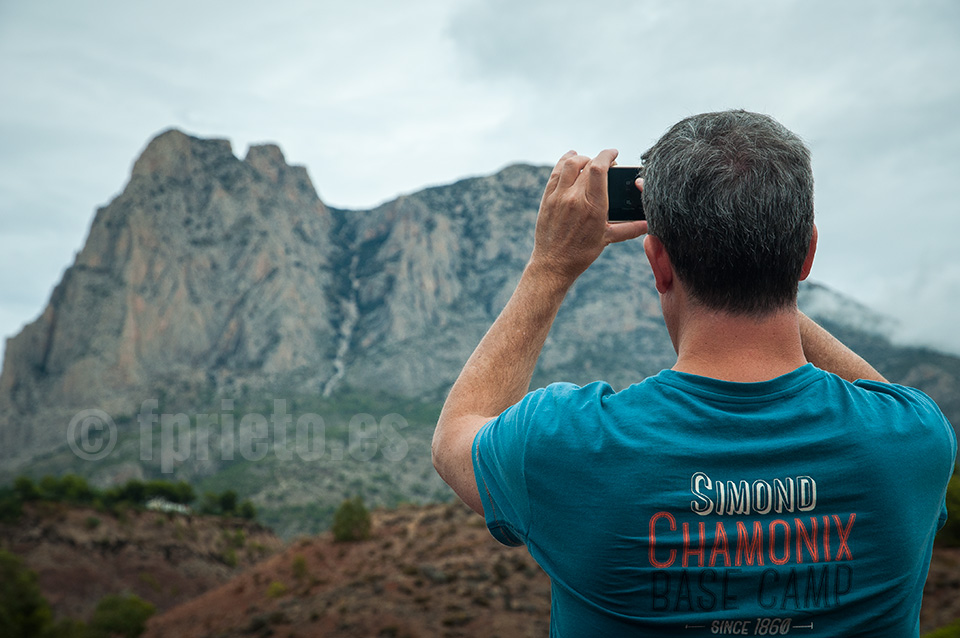 From the Font del Molí, we go up the paved slope, which we leave at the first bend to continue straight on. After crossing a small bridge over a ditch, we turn right, following the directions for PR-CV 289. We have to pass between some country houses, before taking the ascending path that leads us to Foia del Cap (Foia Cac in the indicators).

La Foia del Cap is a small plateau that is about 500 meters high. From here on, the path becomes quite steep, and climbs zigzagging up to a height of approximately 800 metres, before smoothing out its slope when we approach the Font de la Solsida .

We walked along the east face of the mountain, which was devastated by a terrible fire (about a thousand hectares) in January 2009, together with the south face of Ponoig. Luckily, today, it is already quite recovered, although it will still take years to return to what it was.

From Font de la Solsida , a small ascent and subsequent descent takes us to Coll del Pouet , an important crossroads on the north face of Puig Campana, and the place where we leave the circular route to start the attack on the summit.

We are at an altitude of 883 meters, and we will ascend some 400 meters more to the Bancal del Moro , the pass that separates the two peaks of Puig Campana: Pic Prim and Tajo de Roldán to the west, and the main peak to the east.

This part of the climb is also quite steep , and unfortunately it is quite eroded due to the variants that have been formed on the path. There is a lot of loose stone, so extreme caution should be exercised: both not to slip, and not to throw stones at other people who may be below. 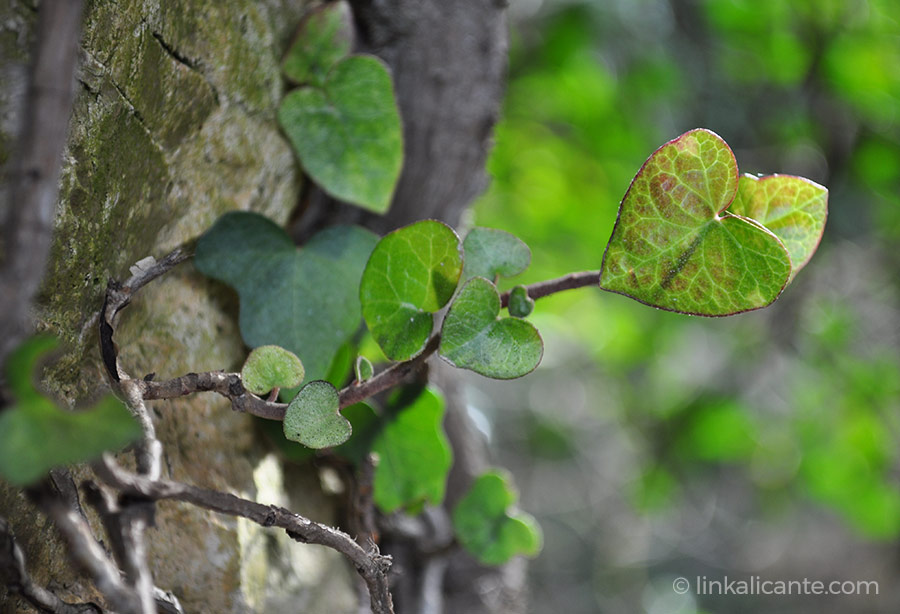 The North Face of Puig Campana is a spectacle as far as botany is concerned. Its particular conditions of altitude and orientation allow the presence of deciduous trees , such as ash and maple trees, as well as holm oaks and of course pines. It also highlights the presence of vegetation adapted to the rocks and scree. A very fragile ecosystem, so it is vitally important not to go off the beaten track and avoid “shortcuts”.

Shortly before reaching the pass, the slope softens, and the path becomes more comfortable to walk, less rocky. Finally, we reach the Bancal del Moro , located at just under 1,300 meters above sea level. If we get to this point, we can almost say that the top is ours, because from here on, the views over the Mediterranean lead us on wings to the geodesic vertex, without even realizing it.

In this last section, however, it is worth paying attention, as there are several unofficial trails that could mislead us. After a slight ascent, we flatten out and overcome a final slope to the summit. We did it!!!

At the top, clouds hover overhead, and mist blankets the shoreline. Still, the view from the top of Puig Campana is impressive, without a doubt one of the best in the entire province. The list of mountains that can be seen is endless, going from nearby Ponoig and Cabal, Aitana, Serra de Bèrnia, Serra Gelada , Peñón de Ifach , Serrella, Cabeçó d’Or … One ends before saying what is NOT seen from up here. Amazing!!

The first time in Puig Campana is special , one of those things that are not forgotten. But in each ascent you discover new details, and as soon as you descend, it seems that you already feel the bug of being up there, among the clouds…

After replenishing our strength and enjoying the views, it is time to return. But first we leave our message in the logbook at the top, protected in a metal mailbox. A pity that it is in a somewhat precarious state of conservation, as is also the case with the geodesic vertex.

From the top, we have to retrace our steps to Coll del Pouet , paying close attention to loose stones during the descent. We take the opportunity to visit the old snow well , taking a small detour from the main path. As in other mountains, the snow wells are an important heritage legacy, witnesses of the fruitful snow trade in our province, between the 17th and 19th centuries.

From the Coll del Pouet, a wide track leads us in no time to the José Manuel Vera Refuge , owned by the Alicante Hiking Center. From here, a path in continuous descent will take us back to the Font del Molí, ending one of the most demanding and at the same time most complete and rewarding excursions in the province of Alicante.

I hope you have enjoyed it as much as I have… Until next time, Puig Campana!! 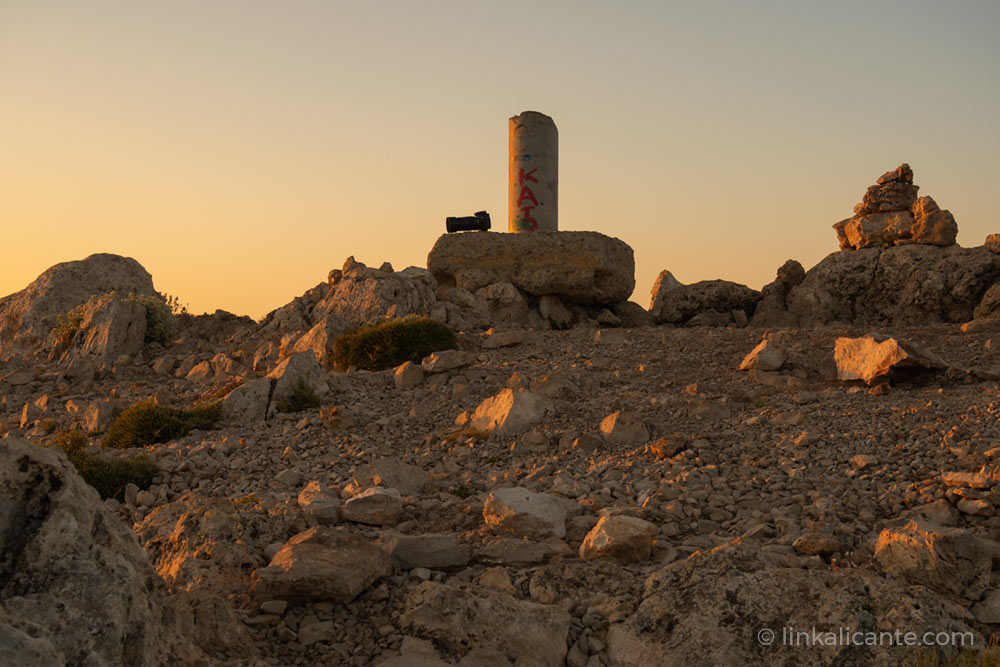 Thank you for collaborating in the conservation of our emblematic mountain!!

Traditionally, the quarry on the south face of Puig Campana, the Barranc de les Marietes (today known as “vertical km”), has been one of the usual routes up this colossus of rock. Nowadays, however, it is a route that I recommend you avoid , as far as possible.

There are several reasons to advise against the “vertical km” climb:

❌ As its name suggests, the path is very vertical, so you will get more tired than climbing the north face. The route is not as varied, and you lose the “wow” factor that you do have when you go up the north face.

❌ The area is very eroded, with a multitude of stones and loose soil. The continuous passage of hikers prevents the vegetation from growing in this area, thus multiplying the effect, and the rains wash away everything in their path.

Instead of going up (or down) the “vertical km”, I recommend you follow the route described in this article: the circular route and summit from Coll del Pouet , on the north face of the mountain.

Next, I leave you the GPS track of the circular route and the top of Puig Campana, in the popular wikiloc application.

See track on wikiloc
Book this tour with a Professional Guide (min. 2 pers.) 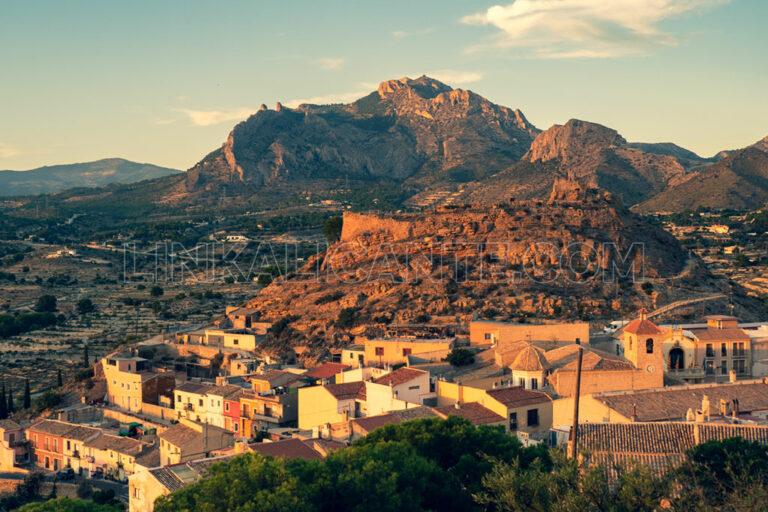