The Sierra de la Serrella , popularly known as “the Alicante Pyrenees”, is one of the most indomitable and spectacular mountain formations in Alicante’s geography. La Serrella is a mountain range that extends for more than 13 kilometres, with an east-west orientation and an arc shape, housing a rich and varied natural and cultural heritage.

In today’s article, we are going to learn about the route that allows us to climb to its highest point, the top of Pla de la Casa (1,379 m.) from the beautiful town of Fageca, in the Vall de Seta. Will you join us? On going! 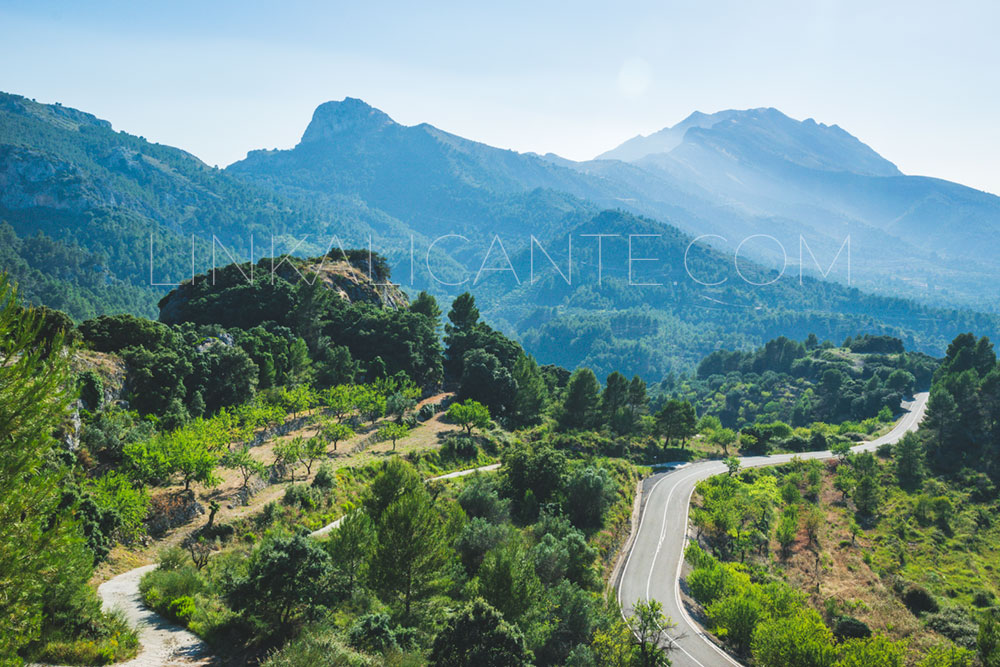 Birds as unique as the Golden Eagle, the Eagle Owl, the Nightjar or the Bonelli’s Eagle live in La Serrella. Please keep this in mind when you visit this natural space of great importance in the province of Alicante.

Short but intense ascent to the summit of Pla de la Casa (1,379 m.), the highest point of the Sierra de la Serrella , from the town of Fageca , through the Barranc del Moro . We make the ascent following the markings of the PR-CV 182 short-distance path. The return, to save time, I did it by the same path, although I recommend doing the complete circular route. 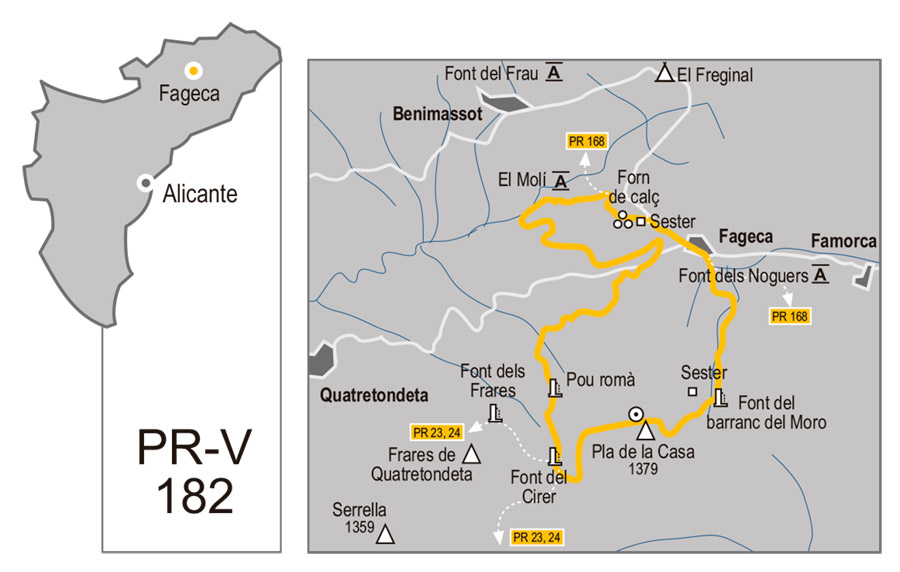 We begin the route in the town of Fageca . On the same road, we find a panel indicating the route that we are going to follow. The path leads us, passing under the road, to the “ Font de l’Esperit Sant ”, on the outskirts of the town. This first part of the route runs between terraces, and leads us to the beginning of the Barranc del Moro , an abyss that opens between the colossal peaks of Plà de la Casa and Mallà del Llop, the two most emblematic peaks of La Serrella.

The section of the ravine is, in my opinion, one of the most beautiful on the route. A gentle slope and a path in perfect condition lead us to the pass between the two peaks. Here we find the Font del Barranco del Moro . On hot days, it is especially appreciated, if only to stick your head under the icy stream of water… The fountain is located at the foot of impressive rock formations. Stylized needles, tortuous cracks, fragmented, crushed rocks.

From this point, we start a new section of path in the direction of the next pass. The trail here is much more broken and eroded. We walk at times in the opposite direction to the one followed by the meltwater. The progress is harder. At all times, we are escorted by impressive rocky walls to our right, a sign of identity of the Plà de la Casa.

Finally, we arrive at the second hill, from where we can contemplate a wide panoramic view, already with views towards the sea and Aitana.

From this point we could head towards Collado de Borrell , passing at the foot of the limestone giant. But we’re headed for the top. The path leads us to a pass where we cross the crest of rock that guards the plain that gives its name to the summit, the Pla de la Casa .

This section of the path is in a somewhat better state than the previous one, but it is very eroded. We already find obvious signs of the goats that roam freely through the mountains. Lots of loose stone. After an impressive approach to the rock walls, we finally managed to reach the plateau with the snow well. 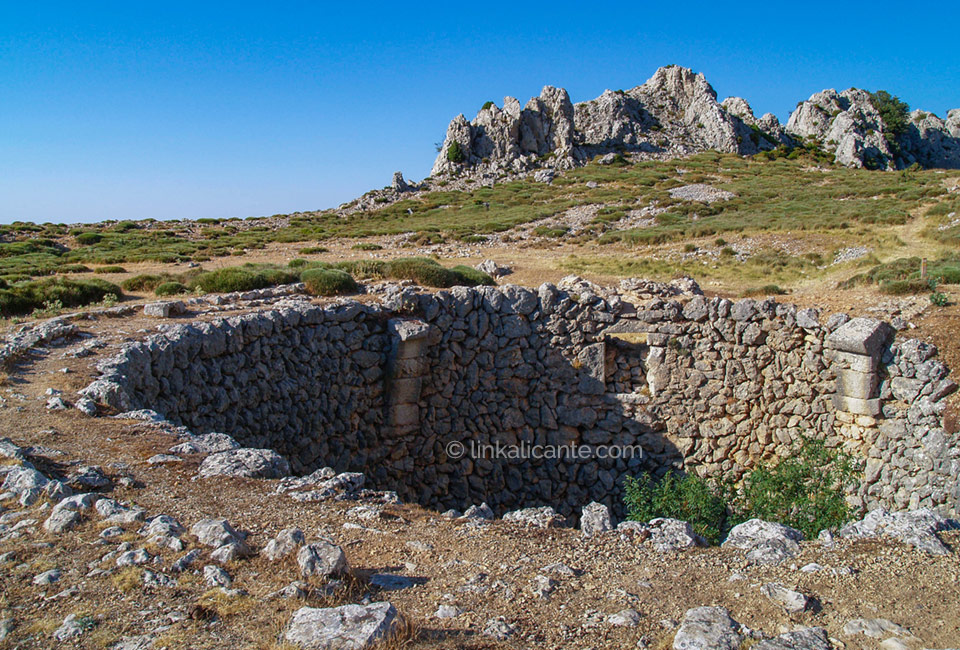 Once here, we only have to overcome a small final climb to reach our goal: the 1,379 meter summit of Pla de la Casa , the fourth highest summit in the province of Alicante. We have reached “the Kingdom of Heaven”.

From up here, we can perfectly distinguish the succession of peaks that make up the superb mountainous formation of La Serrella: from Mallà del Llop to Recingle Alt.

If we look around us and pay attention, we discover that from up here the view reaches practically all the mountains in the province. From Cabeçó to Bèrnia, from Montgó to Montcabrer. A show to enjoy hours and hours.

As an anecdote, to mention that it is my third time in the Pla de la Casa, and the first time that the absence of fog allows me to enjoy the views… 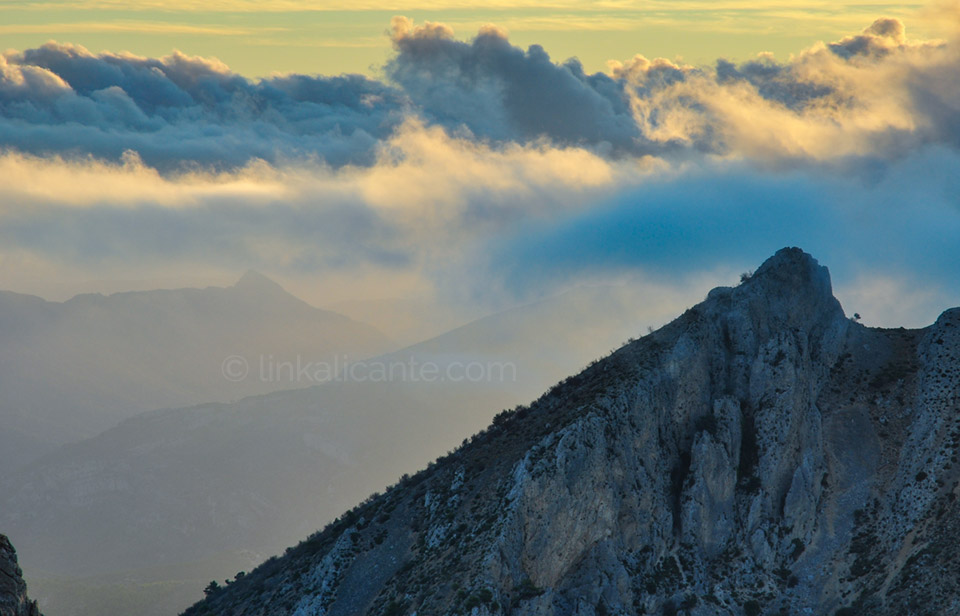 In this case, we follow the layout of the PR-CV 182 short-distance path. I leave you the GPS track of the user Moskys, a mountaineer from Alicante with extensive experience.