Located about 8 kilometers west of the city center, the Serra de Fontcalent (446 meters above sea level) is an elevation of great archaeological, environmental and landscape importance, within the municipality of Alicante . A mountain range that, despite attracting attention when we drive next to it on the A-31, usually receives very few visits from people who love mountains and hiking.

In 2008, I climbed it for the first time, thus publishing this article and giving the mountain the nickname “the forgotten saw “. Since then, things have changed somewhat, and “la Fontcalent “is becoming more and more well-known, if only as a result of the perimeter confinement due to Covid…

In this article, we ascend to the summit of the Serra de Fontcalent to enjoy the magnificent views that it offers us… Are you coming with us?

From the Fontcalente penitentiary (we can also start at the Polígono de las Atalayas) we approach the base of the mountain, in search of a pass through which we gain the ridge of the mountain range. The final part of the climb to the pass is steep and with a section of smooth rock, having to overcome a climb .

The climb is not very difficult for accustomed people, although it can be a small challenge (salvable) for people without experience. There used to be a rope at this point, but it seems to be gone.

On the north face of the Serra de Fontcalent, in the so-called ” Cova del Fum ” (Cave of Smoke), the oldest archaeological remains in the municipality of Alicante have been found. Among the pieces found, a necklace, arrowheads and other elements, which can be visited at the MARQ . More information in this article .

The Volta a Peu a Fontcalente 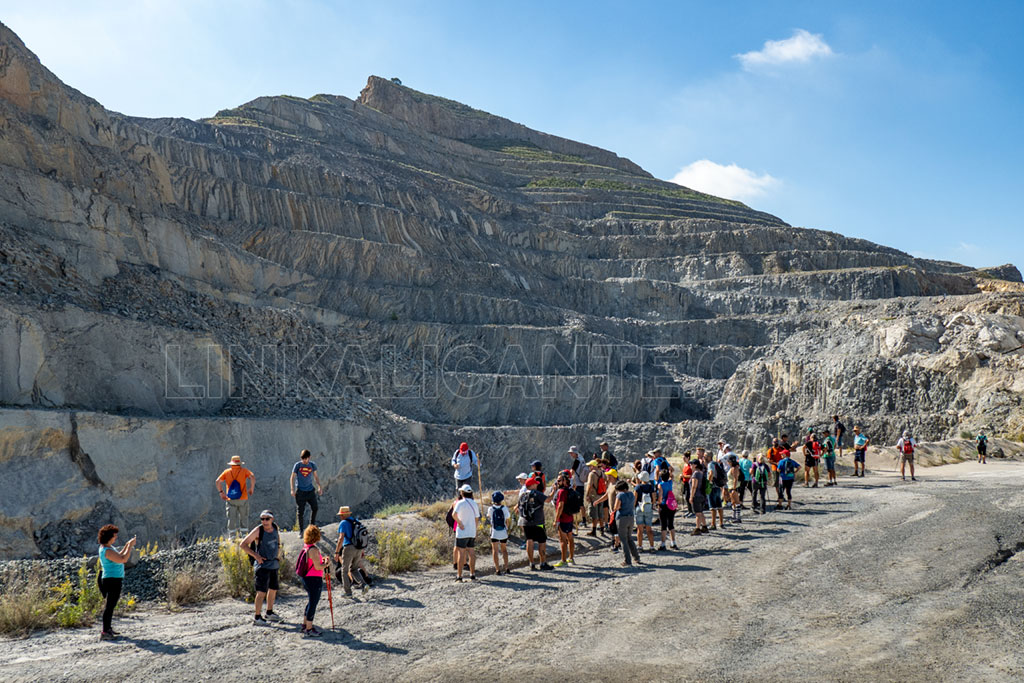 For a few years, the Salvem Fonwarm Platform first and Emilio Rosillo later, have been organizing the so-called ” Volta a Peu a Fontcalent “. An interpretive route that, starting from El Rebolledo , takes a tour around the mountain range, visiting the aggregate quarries and explaining the different attacks suffered by the mountain range, as well as its environmental and heritage values . The last edition was held in 2019, with a wide participation. You can find out more on the platform’s blog or on its facebook page .

The route I followed on that first ascent (in 2008) was “my own harvest”, since there was no reference or any short-distance path in Fontwarming. I opted for what I considered the best place to climb and tried to follow existing paths and/or paths.

Update: In 2011, José Mª Salcedo undertook the signaling project for the path leading up to Fontcalent, with white and blue markings. You can read his description of the route here .

We start from the penitentiary center (or from the Polígono de las Atalayas, with easier access from the motorway). In the first meters, we pass by a small mining pond. 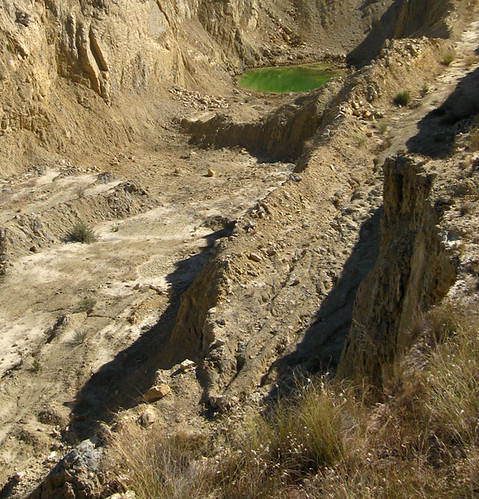 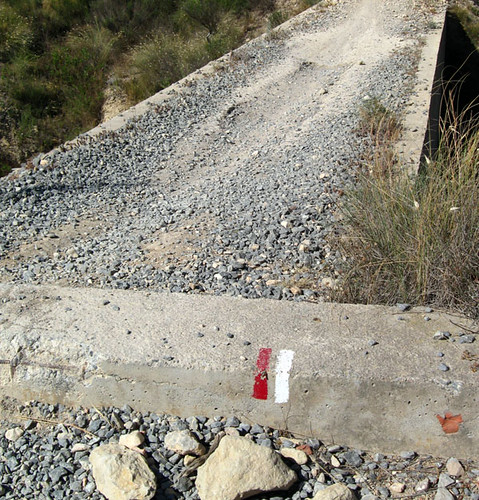 Shortly after we passed by a water tank. At this point we find the Taibilla channels. We always go straight, without taking detours. We will come across the red and white markings of the GR-125 , “La Senda del Poeta Miguel Hernández”. We continue straight. Soon the road will end, and we will have to look for a weakly marked “path”, we will have to put our tracking sense to the test. 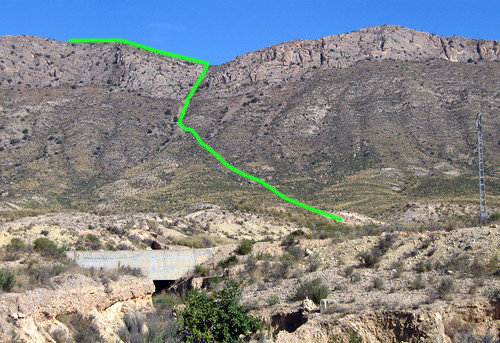 The path brings us closer little by little to what, at first glance, seems to be the only weak point through which we can avoid the vertical step that protects the top of Fontcalent.

The path finally leads us to the foot of the mountain. The path becomes more rocky, and little by little the slope increases. We pass by large rocks that seem to have fallen from the heights.

Thus we finally reach the most delicate section: first a small quarry, and then a section of rock where it will be necessary to use your hands. The quarry is saved by its right margin.

At this point we find some more vegetation and further on some good-sized bushes, and even a small pine. I am struck by the orange formations that I find in some rocks. These are flint nodules, as we can read here . 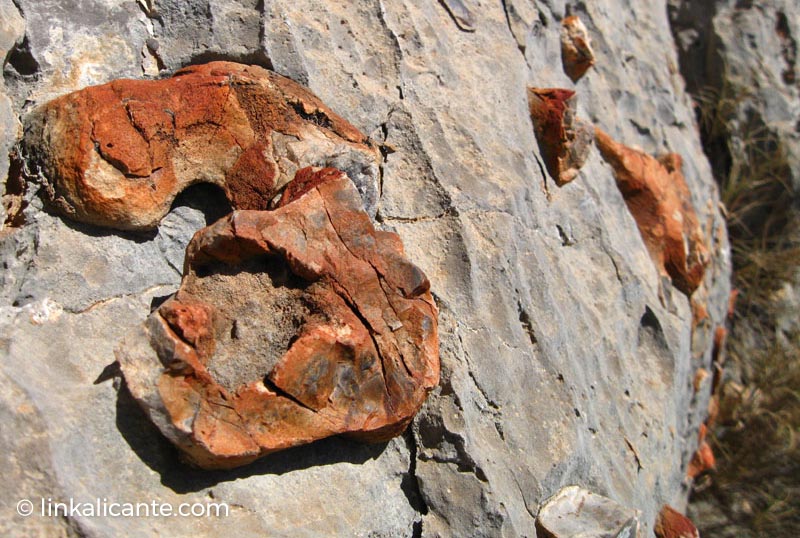 After passing the quarry, there is a uniform section of rock, with a fairly high slope. There used to be a fixed rope here, but it seems to be gone. After overcoming this step, we reach the pass, already in the mountain range. It can be said that we have done the most complicated. 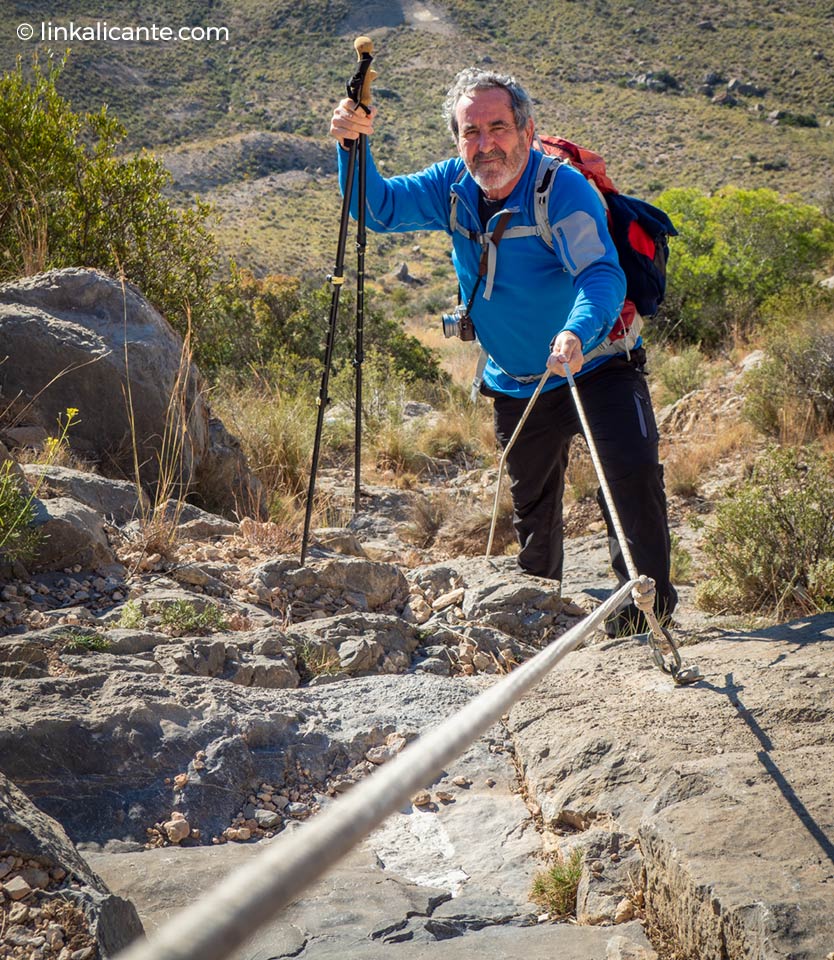 From here, following the crest of the mountain range, we head towards the west, where the geodesic vertex is located. The views are well worth it: we are very close to Alicante, and the city can be seen perfectly, with the sea in the background.

To the north, views of the Sierra del Ventós and Sierra del Maigmó . Further to the west, what I suppose must be the landfill of Alicante, flown over by dozens of hungry seagulls. We can also see the route of the Ave, which, as we remember, destroyed the old Fontcalent fountain . 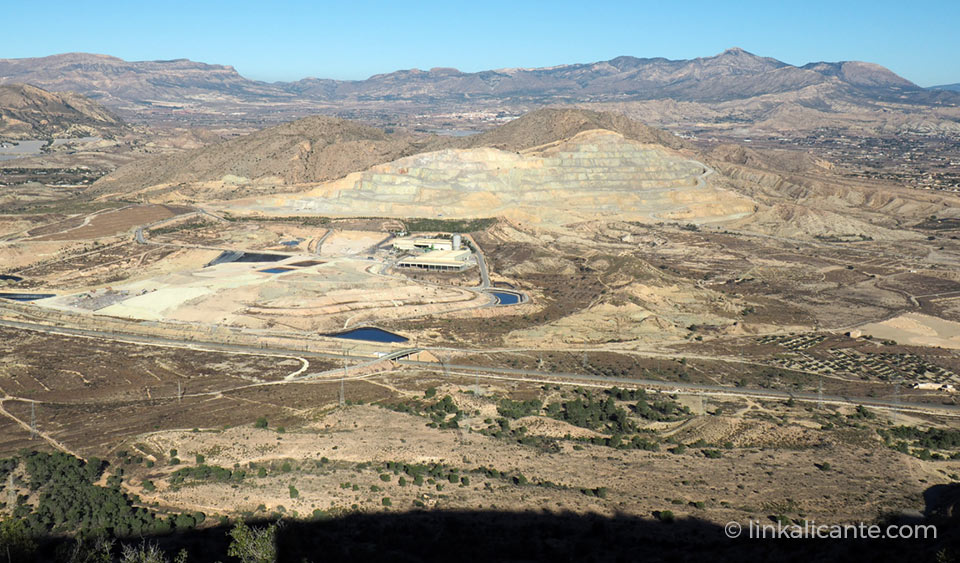 On the other hand, to the east, we have views of Penya Migjorn, Cabeçó d’Or, Puig Campana…

As I was saying, we follow the crest of the mountain range in an easterly direction. In some sections, we walk on a ridge a few meters wide. I find some curious “painted” lime, that the truth is, I don’t know what function they have. A short stop for a bite to eat and… in the distance, towards the end of the ridge, I spot what appears to be a geodesic vertex pylon. You have to get to him… 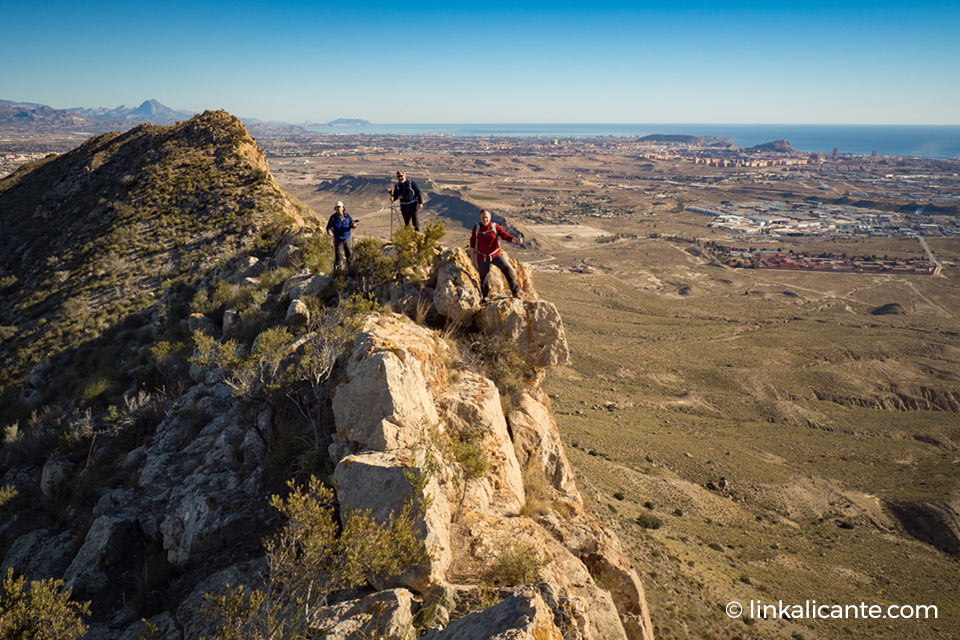 Meanwhile, along the way, we note that the environmental importance of Fontcalent is palpable. Vegetation, remains of animals (removed earth and excrement).

Near the geodesic vertex, I find a Meridinal Smooth Snake (Coronella girondica) (identified thanks to Emilio Rosillo , a great defender of Fontcalent). Unfortunately, she appears dead, apparently, not too long ago.

Without a doubt, this saw does not deserve the mistreatment it has been suffering for many years. 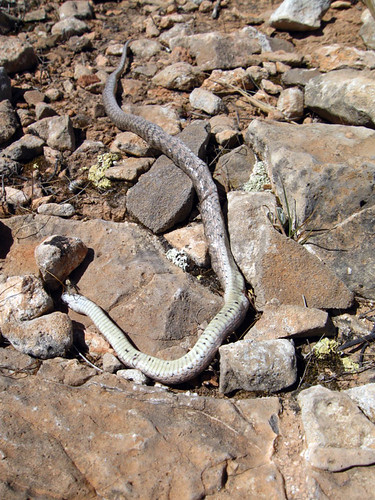 Finally, we reach the geodesic vertex. At this point the mountain widens into a small esplanade, we no longer walk on a “razor’s edge”. 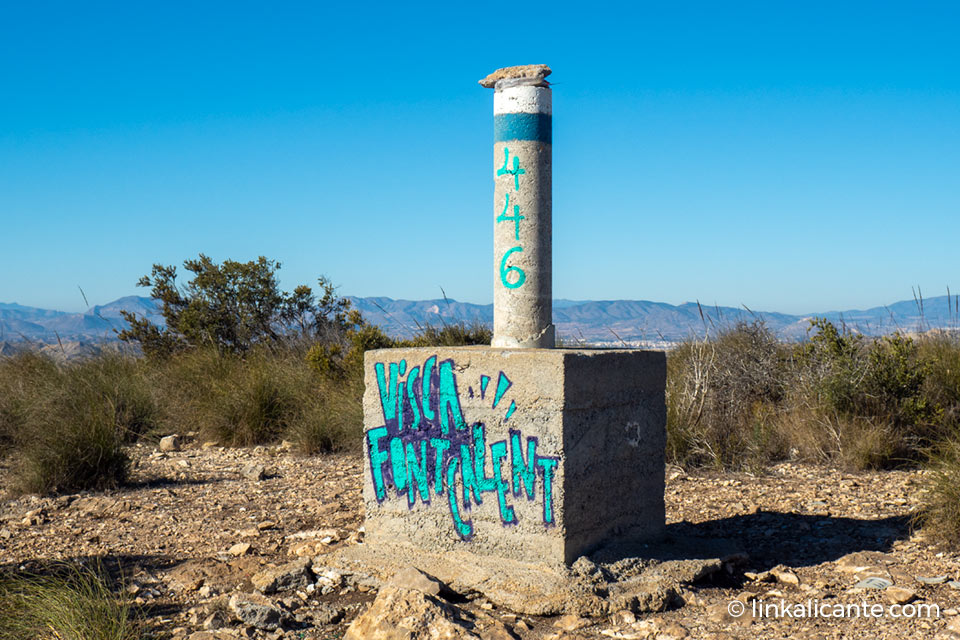 Moments of reflection… Does Fontwarming deserve the punishment suffered for so many years? Has he behaved so badly with these lands and their people, whom he saw born and watched from his heights? The answer is NO, of course not .

It’s time to go back. I will tell what I have seen. Those down there must know, they must know the treasure they have so close. They must learn to take care of it and enjoy it, before it’s too late… 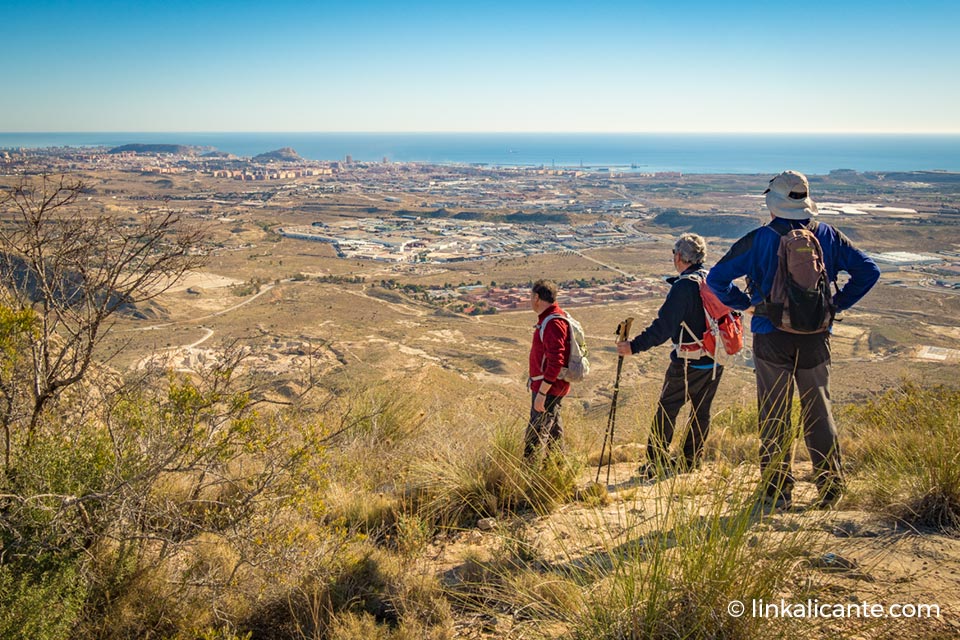 We return the same way. We must pay attention in the delicate section of rock, as well as in the quarry. For the rest, it is a relatively simple route that is worth knowing.

I want to take the opportunity to make an appeal from this humble blog. An appeal to the general public. To the people of Alicante, but also to all the people who love nature and want to save a place such as the Serra de Fontcalent .

Nothing better than to value this battered saw to put pressure on the different entities that, with their ” bad doing “, or with their ” looking the other way “, are contributing to the destruction of this valuable environment. Arid, like much of these lands. Almost desert. Is this why he doesn’t deserve to be saved?

Let’s save the Fontwarming, the mountains of Alicante!

Article originally published in April 2008, and updated in 2021.