The Cova Tallada is one of the most fascinating places on the Costa Blanca: a huge cave bathed by the sea, at the foot of the cliffs of the Marine Reserve of Cap de Sant Antoni, between the towns of Dénia and Xàbia, in the north of the province of Alicante.

In this practical guide to the Cova Tallada I tell you everything you need to know before visiting this amazing subway cathedral, which you can reach by hiking or kayaking.

IMPORTANT: whether you decide to visit it on foot or by kayak, you will have to make a reservation in advance to access the Cova Tallada. Read on to learn more.

✓ El Cañón del Mascarat (Altea)
✓ The Secrets of the Costa Blanca from the sea.

What is the Cova Tallada like?
It is neither a beach nor a cove. It is a place located at the foot of the cliffs, in the Natural Park of Montgó. There is no telephone coverage or lifeguard service.

How to get to the Cova Tallada?
Theshortest access is from Les Rotes, in Dénia (see below for the location). From there, you can walk, kayak or paddle surf. Kayak rentals are not allowed in Les Rotes, but you can either go in your own or book this guided kayak tour.

What is the walking route like?
It is a high difficulty excursion. To enter the cave you have to help yourself with your hands, as if you were climbing. You will need closed sports shoes (better if they are mountain shoes). It carries a lot of water, especially in summer.

How long does it take to get there?
From Les Rotes it usually takes about 45 minutes on foot, and about 30 minutes if you go by kayak (depending on the stops).

Can I come with children?
I would not recommend the walking route for children under 10 years old, due to the difficulty.

Can I bring pets?
I do not recommend it, because of the difficulty of the route and because it is usually crowded.

In the following video you can get an idea of what you will find when you visit the spectacular Cova Tallada.

La Cova Tallada is at sea level. In fact, some of its rooms are flooded, forming a sort of natural pools. This makes it possible to visit it by kayak, making a beautiful route along the Marine Reserve of Cap de Sant Antoni (Cabo de San Antonio), a maritime area of the Montgó Natural Park.

You can go in your own kayak or paddle surf board, from Les Rotes, but keep in mind that you will have to book your appointment in advance, the same as if you go on foot.

Nowadays kayaks are not rented in Les Rotes, but you can book this kayak excursion to the Cova Tallada.

Access with jet skis or motor boats is not allowed, but you can see it up close if you book this catamaran ride along the cliffs of the Marine Reserve.

In the Marina Alta region there are other highly recommended excursions by kayak or boat, you can see them here.

Recommendations for the visit

How to get to Cova Tallada

The most common option to reach the Cova Tallada is to take the hiking route that starts in Les Rotes, a beautiful area of coves and cliffs that we reach by road from Denia. It is also possible to get there on foot following the coast from Marineta Cassiana (Denia), a very simple and beautiful route.

I recommend arriving early to find parking in this public parking lot (about 500 meters from the start of the route). In summer there is a tourist train from Denia and bus all year round.

Once the car was parked, we began to walk along the Via Lactea Street (access by car is prohibited except for residents), going up a steep slope. At the end of the street we find the Access Control and right there begins the path to reach the Cova Tallada and the detour to the Torre del Gerro.

Here you can see the starting point of the route on google maps.

From Les Rotes, the kayak route is easy, about 30 minutes, as long as the sea is calm. Kayaks are not rented in this area (not allowed), but you can book this guided kayak tour.

3. Catamaran Route from Dénia or Jávea

For people with mobility problems, if you go with small children or if you do not want to complicate things, you can enjoy a fantastic catamaran ride through the Marine Reserve and get to know this area of cliffs from the sea. It is sailed some distance from the coast, but it is very worthwhile. In addition, this is an area of passage of cetaceans (it is rare to see them, but it can happen).

There is limited seating at the Cova Tallada on the following dates:

On these dates it will be necessary to make a reservation in advance to access the Cova Tallada, whether on foot or by sea.

This regulation is established with the objective of protecting this valuable and delicate natural ecosystem and cultural heritage.

The maximum time spent in the area will be 1 hour and a half . Click on the button below to access the Parc Natural del Montgó website, where you can make your reservation:

Walking route to the Cova Tallada from Les Rotes (Dénia) 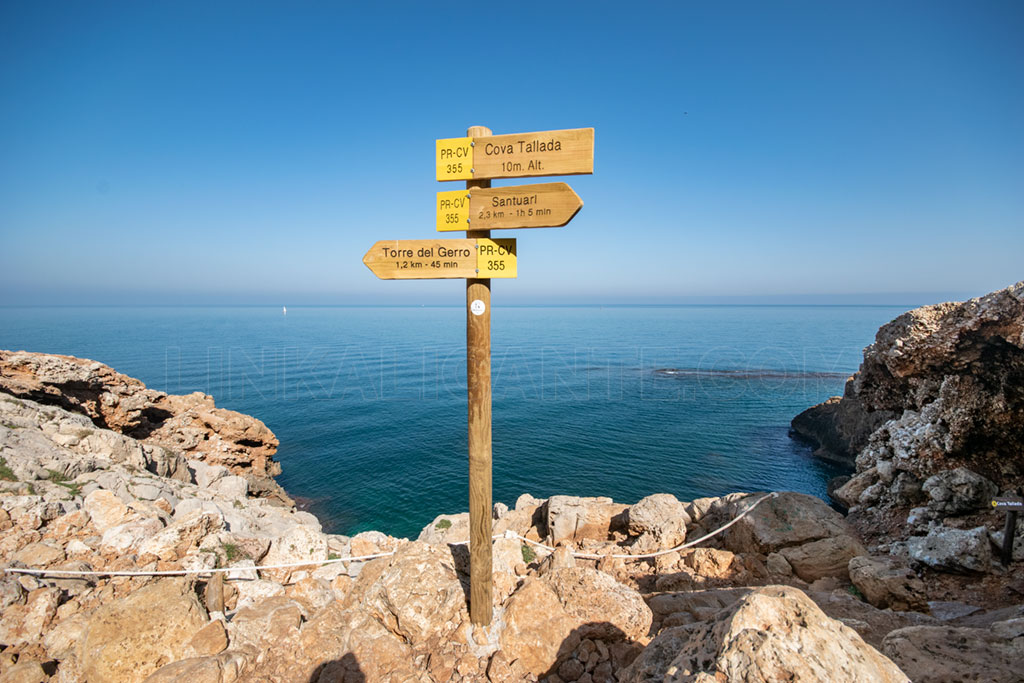 The route to the Cova Tallada from Les Rotes (Dénia) has a medium/high level of difficulty. It is mandatory to wear appropriate footwear, as the trail passes through very rocky, irregular and slippery terrain.

The most complicated point of the route is found at the access to the cave , since the rocks are very polished and very slippery at that point.

Description of the walking route

To reach the Cova Tallada on foot, we start the hiking route from Les Rotes, on the outskirts of Denia. From there, we follow the winding path that, always on the edge of the sea, will take us to the cave.

All this area is the prolongation towards the sea of the Montgó Natural Park the sea, in the form of cliffs.

The journey from Les Rotes to the Cova Tallada, just over a kilometer, can take between 45 minutes and an hour, going at a normal pace.

When you reach the cave you have to overcome a “dexterity” with the help of a chain. Here the ground is especially polished and slippery. Maximum precaution.

We skirt a small section of the cliff, practically at sea level, and arrive at the entrance to the cave. Please note that you can only enter and leave if the sea is calm. 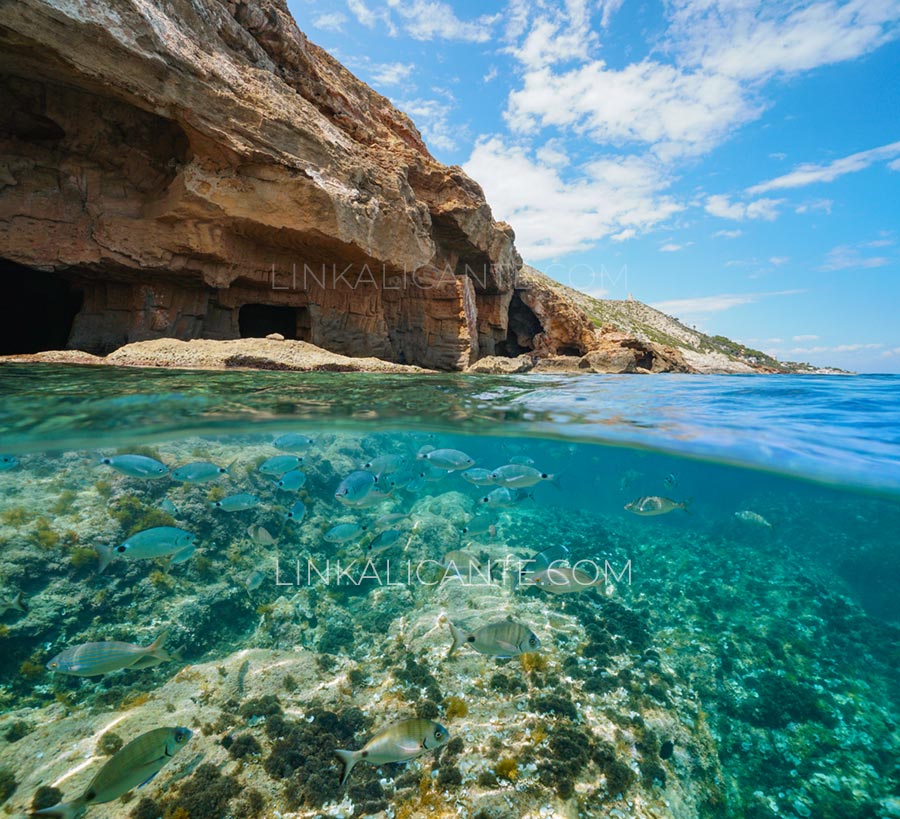 The Cova Tallada is an ideal place to combine hiking with snorkeling (diving with goggles, snorkel and fins). The Cabo de San Antonio Marine Reserve ( Montgó Natural Park) gives rise to clean and transparent waters. Of course, it will depend on the waves of previous days, as well as the influx of visitors that day. Also watch out for jellyfish , as they are common in the area.

Here you can see more ideal places to snorkel in Alicante.

If you go on foot to the Cova Tallada, it is worth taking the opportunity to visit the Torre del Gerro. Located at the top of the cliffs of Les Rotes, in a point with an excellent panoramic view of the coast.

Although the route has no loss, below you can consult the GPS track of the route to the Cova Tallada via wikiloc:

History and Curiosities of the Cova Tallada

The Cova Tallada (“cut cave” would be the translation from Valencian) receives this name because centuries ago it was an important quarry of rough stone, which was extracted by cutting it into large blocks. Being built at sea level, the stone could be more easily transported by boat .

Some emblematic buildings of the Marina Alta, such as the church-fortress of Sant Bertomeu in Xàbia, the castle of Dénia or the windmills of Cap de Sant Antoni, were built with the rough stone extracted in the Cova Tallada.

In a more modern era, some accounts speak of the Cova Tallada being used as a hiding place for submarines during World War II.

The Cova Tallada is, therefore, a marvel that is part natural and part artificial, the result of its use as a quarry. The total route of the cave is about 400 meters, finding different rooms and galleries, from some very spacious and with high ceilings —between 12 and 15 meters— to others that are narrower and “claustrophic”. The outermost rooms are open to the sea through a series of “doors” and partially flooded, forming a kind of “inner lake”.

To visit the deepest part of the cave it is necessary to use flashlights or other means of illumination. If you remain silent, you will be able to hear a trickle of water, coming from different filtrations that are collected by means of stone pools. Not in vain, fresh water has always been a scarce commodity in these lands, and centuries ago its inhabitants learned to use any source of it.

La Cova Tallada is a very, very impressive place. Without a doubt, we are facing one of the most spectacular enclaves on the Costa Blanca, which is why in recent years it has become popular and summer visits are currently regulated (since 2019).

Therefore, my suggestion is that you try to visit the Cova Tallada out of season and, if possible, on a weekday. I suggest you access it for what it is: a magical place , full of charm, full of history and mysteries.

Try to cross its threshold in silence , letting the murmur of the waves be the only sound that echoes in the high vaults of the cave. Listen in silence, let yourself be invaded by the history of its rocks, which will transport you to past centuries, when the stonemasons carved the stone with the sweat of their forehead… The Route of the Cliffs or Penya-Segats is a surprising path at the foot of the impressive rocky walls that shape the coastline of El Poble Nou de Benitatxell , in the Marina Alta region of Alicante. This simple round-trip

This article about the hiking route to the Cova Tallada Article first published on November 30, 2009. Last update: June 2022.

Hiking Routes and Charming Places in Alicante and the Valencian Community. Online since 2007.